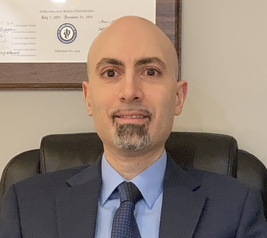 ​Doctor Albeiruti was born in Ohio and raised in Michigan, and he has lived in the Forest Hills area since childhood.  He earned both his undergraduate degree in economics (B.A. With Distinction) and DDS degree from the University of Michigan, Ann Arbor.  While in dental school, he was actively involved in bone tissue engineering research which was published in the prestigious Proceedings of the National Academy of Sciences and the Journal of Dental Research.  ​After practicing general dentistry for 11 years, Dr. Albeiruti developed a passion for endodontics, as it aligns closest with his desire to help patients in pain while saving their teeth.  After two years of specialty training at NYU Lutheran Medical Center in Brooklyn, New York (now named NYU Langone Hospital-Brooklyn), he returned to Grand Rapids to establish his current endodontics practice.  Dr. Albeiruti is a Diplomate of the American Board of Endodontics, which places him in the distinguished group of endodontists who have successfully completed the rigorous board certification process.  He is a member of the American Association of Endodontists, the American Dental Association, the Michigan Dental Association, and the West Michigan District Dental Society.  He also maintains a license to practice endodontics in the state of New York.    When not in the office, Dr. Albeiruti devotes his time to his wife and children. He also enjoys reading and spending time outdoors in our beautiful state.